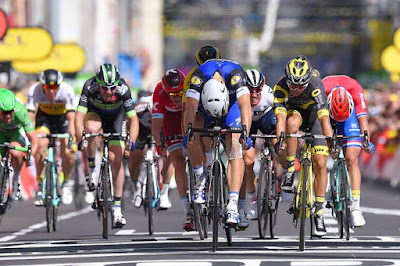 The same old boring first week of Tour de France is slowly rolling by but it has already given us an interesting prediction.
The first 3 stages were won by World Champions, a former World Champion, Mark Cavendish and the actual World Champion, Peter Sagan.
Today Kittel won the 4th stage, could this mean he will be the next World Champion?
This year the UCI Road World Championships will take place in Doha and the route seems to favor the sprinters. Will the prediction come true???
Posted by Piesk8Cycling at 21:02