Great Climbs Around The World: Furcia 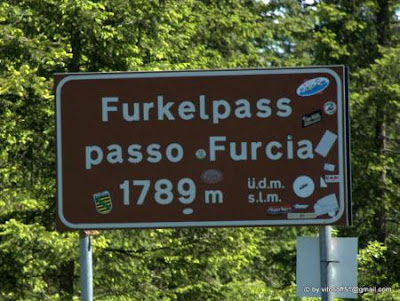 Passo Furcia or Furkelpass (in German) is a pretty hard climb in the heart of the Dolomites.
It leads to the famous climb of Plan de Corones, the theater of  the recent ITTs of the Giro d'Italia,  won in 2008 by Pellizzoti and in 2010 by Garzelli.
Due to bad weather conditions, that didn't allow to climb Plan de Corones, even the top of Passo Furcia itself has been the arrival of a Giro stage, won by Leonardo Piepoli in 2006.
Nevertheless, in my opinion, the Furcia climb must be remembered above all for what Cunego did in 2004.
He attacked in the hardest part of the climb, taking the pink jersey while writing one of the best pages of modern cycling.
Climbing the Furcia, you can still feel the emotions of that day and it is impossible not to try to accelerate a bit during the climb, even just to pay a tribute to Cunego's feat.
Click here for a technical analysis of the climb.
Posted by Piesk8Cycling at 20:19