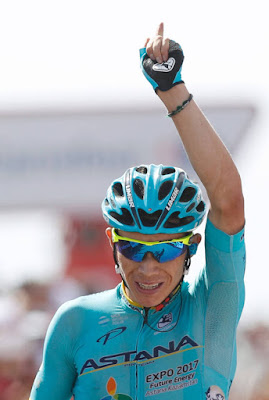 La Vuelta 2017 has been fantastic so far and, with one week to go, the race is still unpredictable.
Froome is struggling to keep his leader jersey as he never did before.
If he will bring the red jersey to Madrid I think this would be maybe his best victory of a Grand Tour.
He has been fighting since the first day, proving that he is able to ride also far away from the flat Tour de France stages.
In case of win, he would complete his first double and he would definitively enter the legends' club.
He would be remembered as one of the most successful Grand Tour riders.
La Vuelta made us discover also a new talented rider named Lopez that is literally bossing everyone when the road climbs.
Will he continue is incredible growth? Has Astana found  a new captain? Will Aru leave Astana? What is the strategy of the team?
We can still discover a lot, a new unpredictable week of Vuelta is starting.
Stay tuned!
Posted by Piesk8Cycling at 08:57