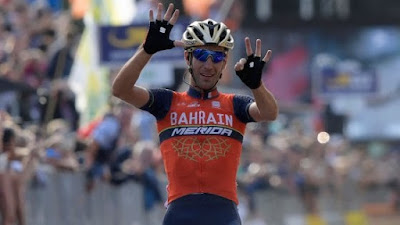 What a race! Nibali won again Il Lombardia and brought Bahrain Merida its first Monument.
The race was incredibly hard and nothing more that the words of Pinot can summarize how it went: "I think Nibali is the most complete rider of the Peloton".
Despite all the critics received during the season, the Squalo came out with an incredible victory.
In the interview after the race he has already set his new objective: Innsbruck world championships.
Seeing how these last Italian classics or para-classics went, with the victory of Uran Uran, Nibali, Visconti, Geniez and with first class riders as Pinot, Quintana and Alaphilippe fighting in the up front, next year's World Champs are going to be memorable.
Nevertheless we have a season to watch and comment in which we will still enjoy Sagan wearing its natural outfit.
Stay tuned.
Posted by Piesk8Cycling at 17:01