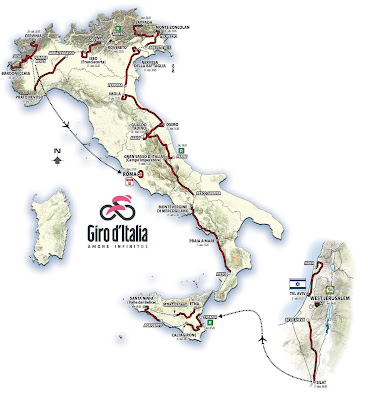 The route of the 101 Giro d'Italia has been revealed and it's really interesting.
The exotic start is a fantastic idea to expand the cycling culture outside Europe. Nevertheless Israel and its silly controversy about "west Jerusalem" prove that maybe the organizers have chosen the wrong country. They are not ready to be part of a melting pot event.
Despite Israeli officials, I think that the TT in Jersualem will be a fantastic scenario for the start of the Giro.
The route continues with interesting stages, that will amuse the spectators and the fans since the first week.
The diamond of the race is the terrible Zoncolan that is something unique in the World Tour.
That stage will worth a Classic and the winner will remain in the history of cycling.
The Colle delle Finestre will be another great climb but it has been positioned too far from the end of the stage.
I have just two critics to move to this great Giro:
1) the arrival in Rome. The capital is a wonderful city but it is not a cycling one.
Milano is the Italian capital of cycling and the final TT in the city should become like the Champs Elysées for the Tour de France. Last year it has been something memorable with the leader jersey changing in the last stage, after a battle lasted 21 days.
2) The Dolomites and the Tuscany have been a bit sacrificed.
Nevertheless I really look forward this Giro, enriched by the participation of the best riders in the world and by Froome too, attempting a historic triple.