Start of the Season 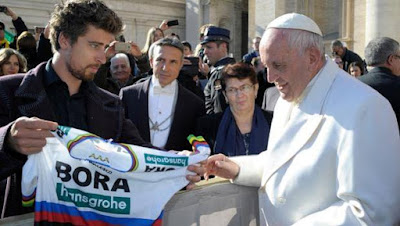 The new season just started and nothing seems to be changed.
Sagan is bossing in and out the competitions, his meeting with the Pope has been fantastic and showed us a grown Champion.
Greipel said again he is still in the game and in pure sprints he is the one to beat.
Degenkolb after a troubled season has already won a race, but will he return to be the champion he was before the horrible accident? I really hope so.
Porte seems to have done this, he won again on Willunga Hill, 6 months after his dramatic crash at le Tour de France.
In conclusion, what can we say about Quick-Step Floors?  They have started the season reaffirming their enormous superiority in the UCI World Tour, they have already won 3 races with 3 different riders.
Do we have to prepare ourselves for another spring of Sagan vs. Quick-Step Floors?
This are the first few 2018 impressions because I don't want to say a word about so many teams that, at first sight, appear significantly below expectations.
Posted by Piesk8Cycling at 12:54