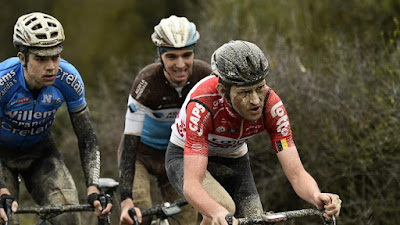 The title does not need any addition.
The 2018 edition of this race is already a piece of Cycling History.
First of all, I have to admit that Belgian riders promptly answered to my last post, Proficiat!!
Secondly, I choose this picture because I think that each of this riders deserves a special mention.
Benoot took the first victory of his career. The fact is that winning the 2018 edition of Strade Bianche is worth a career.
Nevertheless, what impressed me has been the way he won the race. He just never stop attacking, choosing a spectacular sector to launch his final attack.
He rode like a champion in a legendary edition of this race.
In one day and with his first victory, he is already part of the cycling history. The hero of the mud.
Bardet proved the world that he is not just one of the many French riders focused just on the Tour de France and pushed by the French cycling environment just to reach this goal.
He proved the world and most of all his nation that he is a  true rider and a tough one.
Van Aert seemed arrived straight outta the good old days of cycling, without radio and without so many team tactics. He attacked all the time during the race and fainted on the finish line. Welcome to road cycling Wout!
Every single rider that finished the race would deserve a special mention but I only write emotional impressions, so, in conclusion, I think that every single rider that finished the 2018 Strade Bianche could add a kind of victory on his personal Palmarès.
Posted by Piesk8Cycling at 12:48