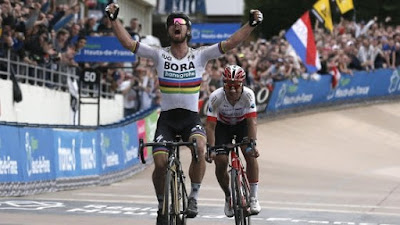 How hard is it to be Sagan?
"You are a champion","you are the strongest one","you have to win", "Of course you have won, you were the strongest".
These are the main sentences we hear about Sagan. In addition to this, you have to deal with the fact that what you do will never be enough.
In Sagan's position, once you have won a race, you have just done your job.
In my opinion ,every Sagan's success is fully deserved and is praiseworthy like every other cycling victory.
We often forget that cycling is a sport for losers.
When 200 riders start a race with just one winner, it is easy to understand that 199 will loose and just one will win.
This consideration seems obvious but I invite my 25 readers to think about this sentence and repeat it as a sort of Mantra.
Sagan is accused to be more talkative than active but this is just his way to deal with the enormous pressure that he endures every race.
Imagine being in Sagan's position without laughing about it; it would be a nightmare.
It is already hard to be a cyclist, it is impossible to be a rider that must win every race he starts.
On Sunday, Sagan rode a fantastic race and deserved this incredible victory.
Celebrating his success, he said an incredible truth: you can attack and ride the perfect race but you have to be lucky.
Paris-Roubaix is such an extreme race that sometimes is the best way to normalize situations pumped too much up.
Sagan used the Paris-Roubaix to do this and he did it in the best way.
He didn't tried to arrive alone in the velodrome, starting a battle with his breakaway mate in the last kilometers, he just wanted to win.
Paris-Roubaix is a race that brings everybody back on earth, you can't theorize or preach too much, you have just to ride the most concrete thing on earth: the cobbles.
The riders know this but for people who never tried the cobbles is easy to forget.


I would like to express my deepest condolences to the family and friends of Michael Goolaerts. 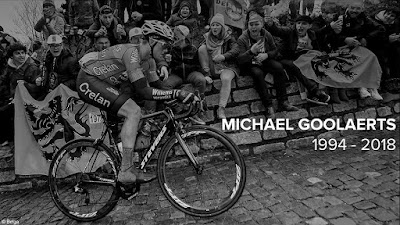