The Worst Race in the World 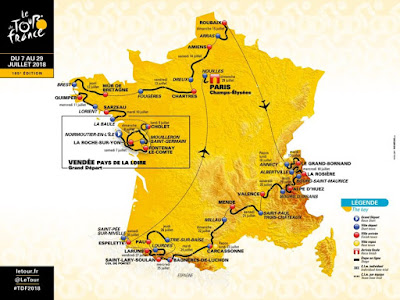 It is hard to understand the decision of the organizers to exclude Froom from le Tour de France.
I know that Froome was born in Africa and French people don't want immigrants but this it too much.
I don't even want to believe that this is due to his Salbutamol case.
It is important to clarify that Froome did not use doping, He was just found an excess of a permitted medicine in his blood and everything has still to be proved.
Froome made history at the Giro d'Italia and he was never found doped during the race, what are we talking about?
Loads of French riders have taken part to the Tour the France with worse doping cases pending on them.
The truth is that French organizers are scared of Froome. Nevertheless, for the love of cycling I've found a solution that will satisfy everybody!
The Tour de France should become the new French National Championship.
In this way, there will be just French riders with 21 French stage winners and the final classification will be won by a French too. The end of the Tour de France will be the new French national day and everybody will be happy.
Who cares about the rest of the world? We are French after all!
Posted by Piesk8Cycling at 10:14