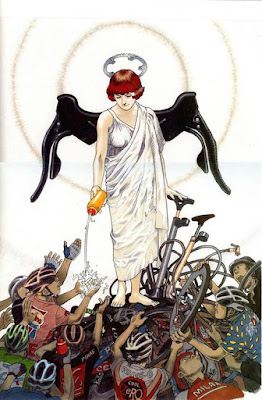 What happen when two of the most famous manga artists love cycling?
The result is in this incredible book called: "Viva il Ciclissimo!"
Katsuhiro Otomo and Katsuya Terada (the first is the author of the manga called "akira" and the second is the author of the manga called "Saiyukiden") in 2007 decided to follow the most fascinating Grand Tour in the world, the Giro d'Italia.
They spent three intense weeks travelling with the Giro d'Italia convoy, tasting from the inside the essence of the race.
During the race they drew the impressions the race gave them day by day.
Once back to Japan they published an amazing book called: "Viva il Cilissimo!"  where they gathered all their drawings.
The Giro d'Italia represented in the book was won by Danilo Di Luca and presented the hardest climb in Europe: Monte Zoncolan.
The book is still available on Amazon.
Click here for more drawings taken from the book.