The Curse of the Rainbow Jersey 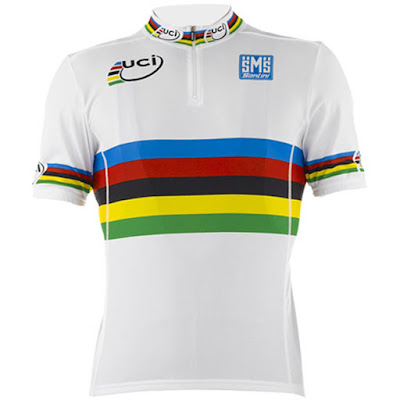 This jersey is the dream of every rider in the world.
It is said that wearing the rainbow jersey it is something that you can't explain, you have just to prove it. The Jersey throws you in a sort of Nirvana, you are, finally, at peace with yourself.
Nevertheless, the rainbow jersey, has a curse you have to deal with.
The sesason with the rainbow jersey, most of the time, it is not the best season of a rider.
World Champions, during their rainbow jersey season, struggle to conquer great results and they generally start winning again the next season, once they have left the cursed jersey to another (unlucky?) rider.
Nevertheless, we have to consider that, among the World Champions, there is a particular kind of riders that we can call legends. They are able to win and excite even during their season in rainbow jersey.
Sagan, at the beginning of the season, seamed suffering from the Jersey's curse but he has been able to defeat it, entering the cycling legend club.
Posted by Piesk8Cycling at 08:51