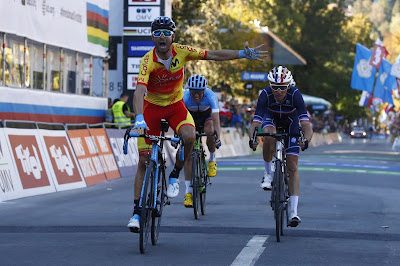 El Imbatido
I think it is hard to spend few words on what Velverde did in Innsbruck, it has been something cathartic.
He sprinted from the worst position, bringing on his shoulders the responsibility of the strongest, and in the end he won. Pure emotion.

Here you can find my grades to the teams and their tactics from 1 (very bad) to 10 (very good):

SPAIN: 10
Finally they raced as a true team moving together in the same direction.
They ended up with an historical victory with their most representative rider.

Denmark: 9.5
They were not the favorite, they used the perfect strategies with their riders.
They attacked since the beginning and almost won the race with Valgren's perfect attack.

France: 8.5
They controlled the race and prepared brought their two best riders in the best position on the final climb. There could have just been a bit more communication in the team about Alaphilippe feelings.

Canada: 8
They took a great bronze medal with a fantastic race of their captain Woods.

Holland: 6.5
This is the best season of Dumoulin but unfortunately he missed all its goals. Nevertheless, we can't blame him.
He saved the performance of its team that could have started attacking earlier in the race.

Belgium: 5
I expected more from the nation of cycling by definition. Wellens disappeared and Van Avermaet saved the race with an attack made more with pride than with legs.

Italy: 4
They raced in a decent way, trying to move the race and being reactive on the attacks during the first part of the race.
They committed a terrible suicide when they decide to push before the final climb, helping France and Spain and demolishing their entire team but Moscon.

Great Britain: 3.5
They controlled the race all day and disappeared in the final.

Colombia: 3
I'm still wondering if they were in the Peloton.
Posted by Piesk8Cycling at 10:05