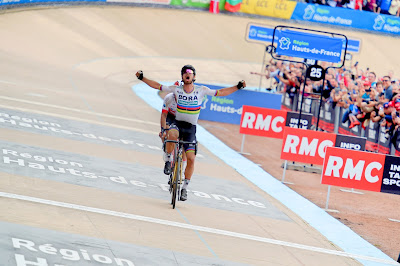 Congrats Peter! You have been elected Cycling Impression's rider of the year!
Someone says that winning a Paris - Roubaix is worth a Word title, but in this case it seems more than just a hyperbole.
Despite Valverde's great victory in Innsbruck, Sagan impressed everybody with his solo attack 50 kilometers away from Roubaix and gained the last encomium of the year.
I think this happened also due to the fact that Paris - Roubaix is the last legendary race. It brings us back to the legendary old cycling, made of gravel roads, punctures and hazard.
Nevertheless, Sagan would be remembered as the last winner of THE Paris - Roubaix because I don't know if we will call the race with its legendary name in the future.
I am talking about the shameful request, made by the Amis de Paris Roubaix, to fill the gaps between the cobbles of the Arenberg Forest with mortar.
They say that, otherwise, the sector is too hard to clean.
I hope they are kidding! We are talking about one of the last legendary cycling places in a cycling world that is moving to new nice places like Oman or Dubai but where history still has to be written.
My final question is: these people, asking to add mortar between the cobbles in the Arenberg Forest, are Friends of Paris Roubaix or Friends of the Sofa?