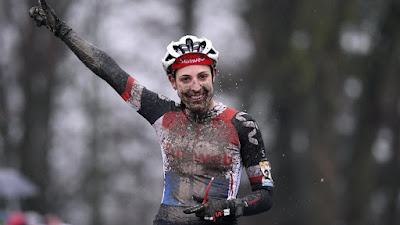 We had the great pleasure to interview Lucinda Brand, a road cycling champion and a cyclo-cross legend!
Here is what she told us:

Hi Lucinda and thank you very much, it is a pleasure and a honor to interview you!
Did you start with road cycling, track cycling or cyclocross and which is your favorite?
I started with road cycling.
When I was 14 years old my dad bought a cyclocross bike for me so I could continue riding my bike in the winter.
Actually, I never have been riding on the track. I never really showed any interest in it, so my parents either me, never took the time to travel to the track to try out. Still the track sounds a bit boring to me, but if I once gonna try, then the Madison would be the one I want to learn!
Choosing a favorite out of road or cross is hard for me. I like the games you play with road cycling and I like the quickly changes of the circumstances and technical challenges in cross.

What is your favorite race?
There are two races I’m very disappointed if I cannot race them. Both are in Italy, Strade Bianche and Giro Rosa. It’s nice they are both in a country I love, but that isn’t the only reason.
Of course Strade has a closer link to cyclocross, it’s an heroic race, you need more then ‘just’ able to ride hard. Giro Rosa is the one of the longest stage races we have.
I like stages races, it feels like I’m becoming stronger every day. The giro also have some surprises, a stage can be longer or a short hill becomes a climb. Mostly there will be stages for every kind of rider.
This combination under a bit harder (warmer) weather conditions I really like and it suits me.

I've to say that I agree with you, they are both fantastic races! You have won a lot of races, including two stages at the Giro Rosa, which is you favorite victory and why?
It’s hard to choose one victory. Every victory has its own special feeling. A extreme breakaway, the team effort, the route I had made to reach the goal.

Who is your sport hero?
I’m not a person who has a real hero.

Okay, let's move to the next question. What is your goal for 2019?
One of my goals is already passed as, the first goal was already in the begin of February, to go for the World title cyclocross, unfortunately I didn’t made it. One of the other goals will be in the summer, last year I just missed the podium in the Giro, so this year I will go full to step on the podium.

You have excited us so much during the Cyclocross World Championships that your second place smells like a victory.
Let's change topic: hobbies when you don't cycle?
Since I have a motorcycle that’s one of the things I like to do when I’m free and the weather is good. As I’m a lot on the road, it is nice to be just home some moments and take some easy time with friends.

Thank you very much Lucinda and good luck for all your goals! Cycling Impressions will always support you!!
Thank you!