Impressions After a Week On the Cobbles 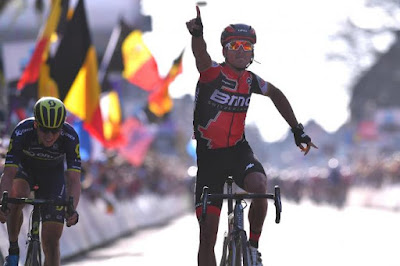 A week on the cobbles has just finished and Van Avermaet comes out confirming his class in one day races.
Nevertheless, I think he wasn't the strongest rider in the peloton, he was just the smartest.
Gilbert lost two races in which he was clearly the strongest, trying to ride in the Sagan's way, a spectacular way to ride but that is not paying back in 2017.
We have also to consider that in order to ride like Sagan you have to be extremely stronger than the other riders and not just in a very good shape.
Allow me now to focus on what happened today in Gent-Wevelgem: while Sagan and Terpstra were arguing, Van Avermaet and Keukeleire, remaining focused on the race, silently rode away.
Van Avermaet took an incredible win that embellishes his palmarés proving that you have to be smart to win without caring too much about pulling as the others or showing that you are the best in the peloton.
I think that Sagan learned a lot from Gent-Wevelgem 2017 and we will enjoy an incredible Ronde Van Vlaanderen.
In conclusion, I want to celebrate the only rider that this week (at Volta Ciclista a Catalunya) won conjugating show, class and cleverness: El Imbatido, Alejandro Valverde.
Posted by Piesk8Cycling at 21:00