The Legend of Peter Sagan - Milano-Sanremo 2017 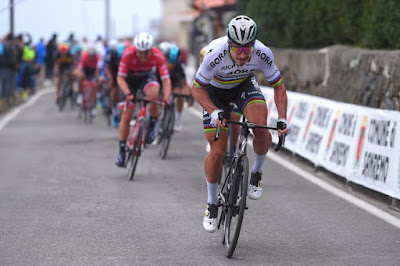 I've alwaye heared old people saying: "yes, nowadays there are good riders, but when there was Coppi..." or "but when there was Merckx...".
Nobody can say this anymore watching Sagan riding his bike.
Sagan is able to do romantic feat in a cycling dominated by technology and mathematics.
What he did on the Poggio during the 2017 Milano-Sanremo has been something that will remain in the history of this sport.
Milano-Sanremo in recent years has become a sprinter Classic and organizers where thinking about modify the route. This is not necessary anymore, you need champions, not route modifications in order to have great races again.
Yesterday the plot of all the romantic masterpieces was respected once again, the main hero didn't win, beaten by a clever and strong rider, the former World Champion before the Sagan's era.
I don't think this is the start of a new dualism, Sagan is simply The Hero and will have to face many different riders trying to defeat him.
Kwiatkowski deserved his Victory, he won in the only way he could against The Hero and will be remembered in the Milano-Sanremo winners list, but Sagan will be always remembered as The Legend and his presence in the Winners list of the various races will be just in the back burner.
Sagan doesn't know the cycling history, they say, It doesn't matter, It is more important making it.
Posted by Piesk8Cycling at 12:59