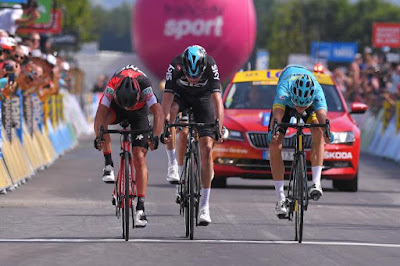 One of the most famous pre-Tour races is over, but I don't think we could collect real info about the riders that will battle for the yellow jersey.
Porte fought hard during the last stage to win the race but he did it just due to his position in the General Classification and because a champion in such a position can't do in a different way.
Nevertheless I don't think this is enough to make statements and predictions about the upcoming Tour de France.
In my opinion, at the end of this Critérium du Dauphiné there are three notable events:

1) The great victory of Fuglsang and Team Astana that after really hard days are trying to rebuilt a dramatic (not in terms of results) season. The team fought harder than ever and, in the end, won.
It is really hard to comment a victory like this, so we can just enjoy it and think about it.

2) The birth of two young talent: a sprinter and a climber. Bauhaus and Bouwman took both their first World Tour win and seems to have promised us great shows in the future.
The victory of Bauhaus is the top of a maturation process that passed through a great Giro d'Italia. Will Bauhaus be the next German great sprinter?

3) Valverde is immortal and is one of the best riders of all times. He is one of the few rider (Sagan is another for example) than when takes part to a race you can be sure it will be an exciting one and you won't forget he is in the race. He is 37 and he is never complaining, this is a great example for so many riders that claim to be the best. and pretend so much.

See you soon to see what happened in the Swiss corner of the pre-Tour preparation.