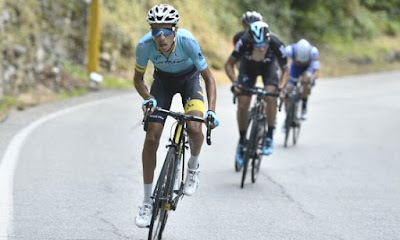 I've seen so many races during this weekend of National Championships all around the world and the one that impressed me the most was the Italian one.
Aru won like a champion with one of the best attacks I've seen this season.
He attacked on the last climb and never slowed down, always pushing hard on his bike.
Aru's cycling style is particular but fantastic to see in a day like yesterday (extremely hot) and on the hardest climbs.
He is an emotional rider, every stroke of the pedal  is like a step towards his personal redemption.
There is the shadow of Scarponi on Aru's victory, he rode with the jersey that his friend gave him while they were training in Spain. This is cycling.
If Aru maintain this shape during the Tour de France, I'am sure it will be a great show.
It is a long time we don't have a Champion so close to the people, with a so expressive way of pedaling.
Posted by Piesk8Cycling at 08:36