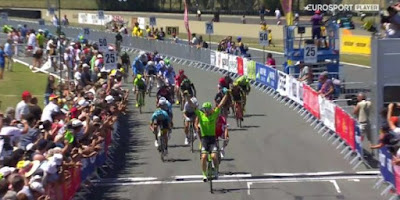 What a nice final for the Route du Sud 2017! Scully won the last stage after a thrilling sprint on the racetrack of Novaro.
The Route du Sud gave us great signals about the team Cannondale-Drapac, can we finally expect to see something good at le Tour de France from this World Tour team? I really hope so.
Tour of Slovenia and Tour de Suisse proved that the Team Bora-Hansgrohe is ready to lead their first Tour de France.
Nevertheless, I'am worried because I see so many pretenders for a stage to win in good shape, but I don't see a proper parterre of contenders for the victory of the Tour de France general classification.
I really hope it was all tactics so far but with such a great Giro d'Italia, this year, many Grand Tours riders choose the Giro instead of the Tour.
It is going to be a strange Tour de France this year, but we'll be ready to comment everything is going to happen.
Posted by Piesk8Cycling at 16:37