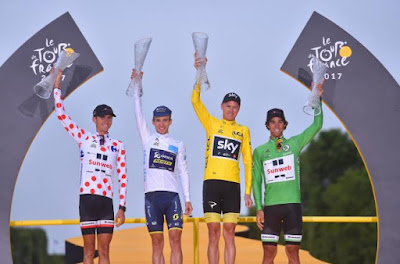 One of the most boring Tour de France I can remember, due also to the tracery of the organizers, finally came to an end.
The jurors tried to do everything to provide as much French victories as possible, disqualifying and penalizing foreign riders, but, in the end, as always, Froome won.
There is not a big winner of this Tour, Froome appeared to be more vulnerable than the previous editions but none of his opponents has been able to beat him, due also to his incredible team that controlled every single stage.
From this Tour de France comes out a big martyr, the strongest rider on the road, a man that could have easily won this edition of the Tour de France but he was in the wrong team. All our thoughts are for you Mikel Landa.
Here you can find my grades to the teams,  from 1 (very bad) to 10 (very good), you, dear Impressionists, will choose the rider of the Tour de France in the upcoming survey.
Team Sky - 9
They have won their 5th Tour in the last six years this says all. Nevertheless they are a dictatorial regime, there is no space left for unplanned exploits by other members of the team.

AG2R La Mondiale - 8
They tried in any way to win this Tour de France but, unfortunately, for Bardet, even a single kilometer against the clock is too much.

Movistar Team - 5
They lost Valverde during the first stage, the alternative to a Quintana still recovering from a really hard Giro.

Trek-Segafredo - 6
Contador has the heart of a lion but not the legs. They go home with a stage win, at the beginning of the Tour de France they had bigger plans.

BMC Racing Team - 5
They lost their best rider, they didn't have a second plan, they failed.

Astana Pro Team - 1
Is this a team? The strategy was to leave Aru alone as soon as possible? Still wondering...

UAE Team Emirates - 5
A top ten could not be enough for the team.

FDJ - 5.5
They sacrified half of the team with a rider. They won a stage.

Orica-Scott - 7
The white jersey was the main goal, they did it. They could have won a stage.

Dimension Data - 6.5
They lost their main sprinter, they had a second plan, they won a stage.

Quick-Step Floors - 8
They dominated every single sprint they took part. They were helped by a Tour de France with tons of flat stages.

Bora-Hansgrohe - 7.5
They lost their most representative rider after a questionable decision by the jurors. They won another stage.

Team Katusha-Alpecin - 5
They failed all their objectives.

Lotto Soudal - 5
They failed all their objectives.

Team Sunweb - 10
They won, they amused the crowd, they deserved two fantastic jerseys. Team of the year.

Cofidis, Solutions Crédits - 3.5
I discover they were at the Tour when Bouhanni punched another rider.  They disappeared again after that episode.

Team LottoNL-Jumbo - 8
Two great stage win, one of them on le Champs Elysdées, what else do you need?

Cannondale-Drapac Pro Cycling Team - 9
Stage win and an unexpected second place in the general classification! What a Tour de France!!