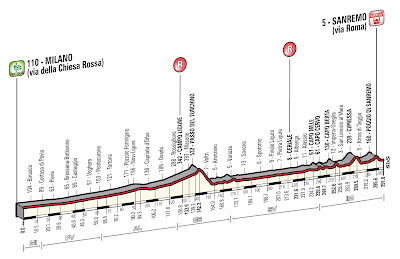 This year the Classicissima will be one of the most classic of all time.
Finally, afer years of unsuccessful attempts to change the most fascinating race in the world the organization has decided to bring back the Classicissima to its original format.
The Milano - Sanremo 2016 will arrive again in the legendary via Roma and it will take place on Saturday.
I've always sustained that there is a big difference between conquer a Milano - Saremo and conquer a Milano - Sanremo crossing the finish line in via Roma.
The magic this year is completed by the fact that the race will be on the 19th of March, the day in which is celebrated San Giuseppe in Italy, which was the historical date of the race.
After this little preamble we can face the main questions: will the race finish with a sprint or will a hero be able to escape and to stay ahed to the finish? will a home rider win the race after ten years of abstinence? will be Peter Sagan in his rainbow jersey the first to cross the finish line after 33 years since Giuseppe Saronni won the race in the rainbow jersey? who will be the first to attack on the Poggio?
I've no idea and this is what makes the Classicissima the most amazing race in the world.
Posted by Piesk8Cycling at 18:38