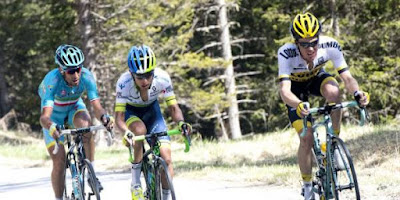 In a drowsy Giro finally Dolomites arrived.
It is fantstic to see how, facing these climbs, there is no space for tactics or tricks.
Dolomites are the mountains of the truth, there is no space for lies. In the last two days, I've heard people talking about the unpredictability of this sport, this is true but we have to clarify a point: Nibali or Valverde didn't have an inexplicable slump. What happened to this Champions it is easy to explain: they have just found riders in a better shape or stronger than them.
This didn't come out until now due to the kind of stages that Giro d'Italia 2016 presented so far.
Giro d'Italia is the toughest Grand Tour for this reason: you can't prepare it in a scientific way, when Dolomites arrives it is just you, your bike, your energies and your soul.
This is not a Grand Tour for robots, it is a race for romantic heroes.
You can't prepare and pretend to control the Giro using data provided by a computer, you have to understand and feel the Dolomites.
In conclusion I want to thank these incredible mountains for keeping the Giro the best Grand Tour in the world despite the economics interests that recently are making Giro a Grand Tour with a slow start.
If the organizers will draw in this way the route of the  future Giros, Giro d'Italia could last just 3 days, the three Dolomite stages.
Giro was the hardest race because it was full of tricky stages for clever riders, I ask the organizers not to let us, in the future, just hope and wait for the Dolomites to come. This will happen anyway, but with a different amount of emotions accumulated during the first two weeks.
Posted by Piesk8Cycling at 10:01