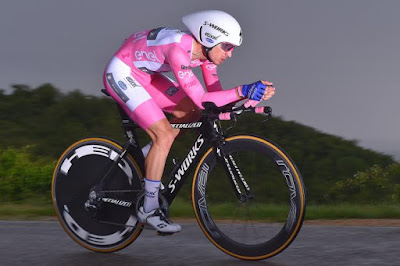 The 99th Giro d'Italia has been a strange Giro so far.
Giro was famous to present great fights since the first week, with tricky stages and new strong climbs found around the country every year, while waiting for the giants of the Alps.
This edition of the Giro d'Italia looks like a poor Tour de France, with predictable stages during the first week, a time trial as first battle ground for the contenders and in general a slow waiting for the climbs that will arrive later on.
This is not what has made Giro the most exciting, hardest and unpredictable Grand Tour.
Giro has always been a race for emotional and crazy riders, ready to attack without too many tactics. This was made possible, even in modern cycling, by the features of the stages, never dull and resourceful for the attackers.
Putting a time trial after the first week it is tipical of the Tour de Frace, where you wait bored until the last week, hoping for a rider to attack by chance.
The Tour de France, in recent years, changed its structure, understanding that the kind of race they presented was unsustainable for the show and the Tour de France became more similar to the Giro.
Now, my question is: why if the proud and presumptuous French organizers have changed the Tour de Frace, making it more similar to the Giro, in order to make more exciting the first part of the race, Italian organizers are copying the old Tour de France organizers making the Giro a boring race with a slow start?
Posted by Piesk8Cycling at 09:21