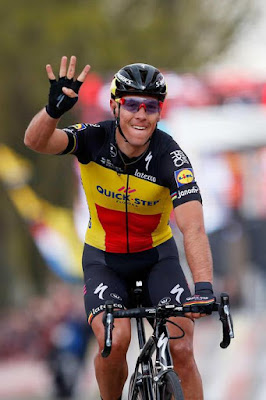 The final kilometre of the Amstel Gold Race 2017 has been something amazing, something more than just cycling.
The two characters of this amazing show have been Kwiatkowski and Gilbert, the riders that showed the best shape in 2017 classics campaign.
They arrived in the Ardennes with prestigious and spectacular victories conquered this year in the previous classics. Today, they found themselves in this emotional final kilometre where just one of them, in the end, would have won.
The final has been absolutely unpredictable: Kwiatkowski, apparently stronger than Gilbert in a sprint, showed Gilbert respect, refusing to take the lead in the final kilometre.
This has been a mistake, the last kilometre became a psychological and tactical battle, but more that a matter of strategy, the final duel turned out to be a mental toughness question.
Kwiatkowski used the same strategy that in March had given him his great Milano - Sanremo victory but, this time, he wasn't fighting with Sagan and Alaphilippe, two young and bumptious riders.
His opponent, today, was a clever "old" champion, Philippe Gilbert, one of the most experienced riders in the Peloton.
Kwiatkowski has been beaten by an opponent better than him at his own game.
The attack of Kwiatkowski was provoked by the patient and the courage of Gilbert, waiting 'til the end, confident that his young antagonist would not have resisted longer without attacking.
The last kilometre of the Amstel Gold Race 2017 should be projected in any kind of school, because it is a life lesson.
Has Kwiatkowski learned the lesson? We will discover it soon.