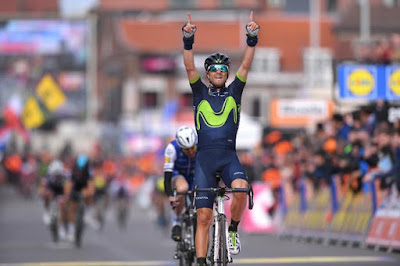 This article is the natural continuation of the previous one and we have to thank Valverde for this.
Valverde and Scarponi, two riders representing the good old cycling but still victorious in the modern one.
Just a great Champion could have done this: He won the oldest of the Classics and dedicated the victory to his friend dramatically passed away the day before.
What can I add to this fantastic and emotional victory? Nothing.
Valverde is dominating the season, he has won almost every race he took part.
He is definitely the most all-round rider of the Peloton, a genius of tactics, a rider that honors the cycling season from February to October.
Such a great rider, a true friend of Michele, could not have honored his friend in a better way.
Posted by Piesk8Cycling at 10:13