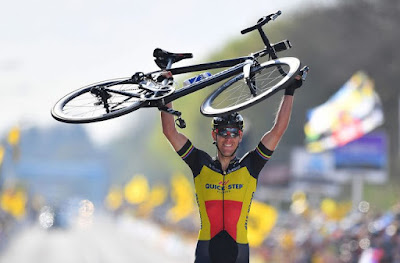 I want to start the article on such an epic race with two quotes:

The first is of the World Champion, Peter Sagan, that,  when asked if the trio would have caught Gilbert, replied: "I think so. Given how I was riding and I had strong companions, so yes, I think I could have got back up to him, but destiny didn't want it".


The second is of the Winner of the race, Philippe Gilbert: “It all started on the Muur. I was riding on Tom Boonen’s wheel and it went on from there,” Gilbert said. “We had three riders in the group and we decided to push on.”

These two quotes explain better than 100 words how epic has been the 101° ronde.
The genius of Tom Boonen invented an incredible race and the class of Gilbert drew it.
In the final, when a super strong trio made by Sagan, Van Avermaet and Naesen could have ruined such a wonderful masterpiece, destiny decided that it was time to pay back the Belgian champion for the amazing start of the season and for his bravery.
This has been the 101° Ronde Van Vlaanderen and we will talk about and remember this race for a long long time.