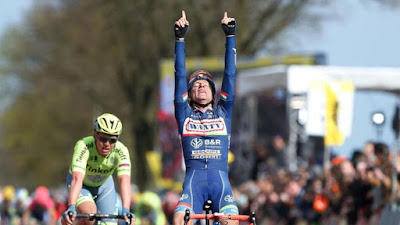 This has definitely been the most cathartic win of the season.
Gasparotto is a rider who struggled to find a team and went through a difficult period of his life, having problems with his wife and his self confidence.
Wanty Gobert is a professional continental team which dramatically lost a rider a couple of weeks ago during the Gent - Wevelgem 2016.
Gasparotto won for himself, for his teammate and for the only team that believed in him. The inverview after the race has been very touching, confirming that cycling is the most romantic sport in the world.
Most of the riders are romantic heroes, it doesn't matter if they win or not, this is what they are. They are not just running, most of them have personal reasons hidden under their jerseys.
The Amstel Gold Race 2016 was won by one of them and it has been amazing.
Another significant aspect is that, on the podium, two (Gasparotto and Colbrelli) of the three riders ran for a professional team, proving that in cycling there is just one thing that matters: heart.
Gasparotto's race was pure hearth, pushed by his rage and by Antoine. He couldn't loose this race and he didn't.
Posted by Piesk8Cycling at 21:38