This should be the full name of this LEGEND.
When Tommeke smells the stones he becomes a superhero.
Yesterday he ran the perfect race. He could be the only rider so brave to decide to attack when there were still 120 km to go, but we are not talking about a general rider, we are talking about The Rider.
The last poet of the stones. He didn't win yesterday, beaten by the Carneade of the day, but what a race by Tommeke.
He demolished the stones, always in front of the bunch of rider that by chance followed him in his crazy attack, giving new impetus to the winning action, started when there were still 120km to go.
The 2016 Paris - Roubaix has been the umpteenth lesson of the king of the stones.
He rode to win, It doesn't matter he didn't, but this is what make you a champion, a legend, a hero.
If you want to know how to ride a Paris - Roubaix, you have just to watch all the Boonen's Paris - Roubaix, not the only ones he won.
Tom, riding on the stones, is pure poetry, you can't find any other rider in the peloton so elegant on the stones. He doesn't need gloves, he is at home, the stones are his natural field.
He should be a protected species.
I don't know if he will retire at the end of the season, the only thing I can say is thank you Tommeke! For yesterday, for every single time you demolished the stones. 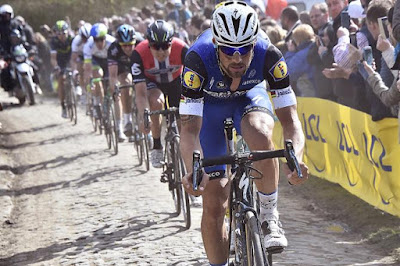