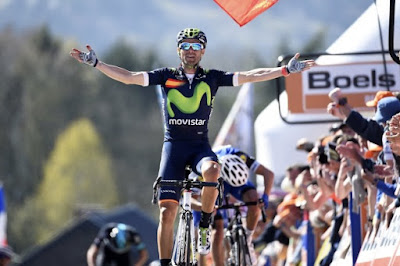 We are talking about a true legend. One of the strongest riders of all time.
As I was saying a couple of posts ago, in the Ardennes classics we are in front of a different kind of champions but I think that Valverde is unique.
He has alreay won a grand tours, the Vuelta, and in May he'll try to win the Giro. He has won 3 Liège - Bastonge - Liegè and 4 Flèché Wallonne (3 in a row), what should I say more?
What was impressive today is how he dominated the Mur de Huy, he bossed the opponents, he demolished the wall.
He gave the idea to be in full control of the situation, he made it look incrdibly easy.
There is only one explanation for this, we are in front of a champion, a true talent, born to demolish this race but not just one race.
A curious aspect of the Ardennes Classics is that some of them are race made for particurar riders, see Amstel Gold Rafe for Gasparotto or Raas, but here we are in a different situation.
Valverde is a complete rider, who chose to boss a race in a way that is incredible. Of course he has the record of wins for this race but I think that in this contest It is minor, It sounds almost natural.
Today he seemed a dancer in a classical ballet, he climbed with an elegance tha you couldn't see in his opponents that were struggling to stay hanged on the Mur de Huy and avoid to fall off the wall (Mur means wall).
The only thing I can say, as we are in front of an étoile performing in his favourite theater, is: Bravo Alejandro!
Posted by Piesk8Cycling at 23:56