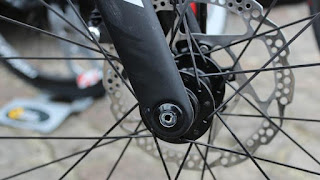 I want to start saying  that, in a time where the safety of the riders is the biggest problem to deal with, allow the teams and the rideres to use disc brakes during the race is the worst thing you can do.
Crashes, as we can unfortunately see every day, are incredibely frequent in cycling and riders get injured because they can't control or avoid the crash due to the fact that they are really close to each other.
Consider now what will happen if  every single rider in the peloton mounted disc brakes on his bike: the first crash would be a massacre.
Disc brakes are like super hot blades mounted on your wheels.
We have seen so many times riders stuck in a bunch of bikes and I don't want to think about how the riders would come out of the bunch: bleeding to death or full of wounds in the best cases.
After few races the survivors would be full of scars, more than the Iliad mythological warriors.
I don't want to be a Cassandra, but the first time the entire Peloton will mount disc brakes, it will be the last time too.
In conclusion, I completely agree that disc brakes are more efficent and safer in every kind of wheather conditions and I think that a lonely rider should mount them on his bike, but you can't allow  riders to use them in a race!
Posted by Piesk8Cycling at 14:24