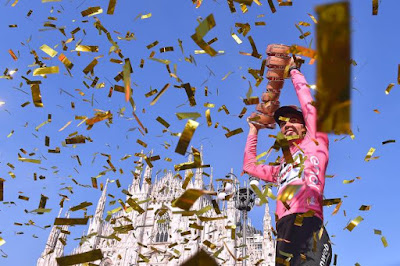 In the end Dumoulin won and I can't remember a Giro so uncertain and so deserved.
The level of the Giro 100 has been extremely high and Dumoulin won because he was the most complete rider of the Peloton.
He proved also to be the smartest in several situation, winning his first Giro with strong legs but with a stronger mind.
His opponents never really tried to do something risky in the final week, they were all scared, despite their statements, to lose their position in the General Classification.
We discovered yesterday that Quintana has been sick during the last two weeks but I still think that some riders can have more than a regret.
What Team Katusha Alpecin made in the last stage would have shaken the GC many times if done by stronger teams in  previous stages.
The sad truth we have learned is that it doesn't matter just to win.
In modern cycling you prefer not to loose a third or a sixth position than trying to win a Giro, considering that in the worst case you can loose badly.
Talking about the teams without a proper GC contender, I just want to underline a key point: why if such a great team as Quick-Step Floors is always attacking, even in the last stage, the teams invited, with the exception of Team Gazprom-Rusvelo, never really battled hard in order to try to win a stage?
Here you can find my grades to the teams,  from 1 (very bad) to 10 (very good), you, dear Impressionists, will choose the rider of the Giro in the upcoming survey.