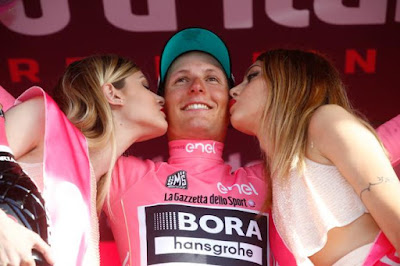 Thank you Giro d'Italia for being such an unpredictable and fascinating race.
Could the 100th edition of the Giro have had a better and more unpredictable start? I don't think so.

Giro is a race I've always loved, since I was a kid.
The fact is that, at Giro d'Italia, you can't lie. The stages and the streets are too embroidered, too tricky, you have to be really the best in order to win.
If you win the General Classification of the Giro d'Italia, It is a Victory you definitely deserve.
Every stage you win, every jersey you wear, you can be sure that you deserve it, because you have been the best: the strongest, the smartest or both.
Postlberger today proved us this. That's the Giro, you have to think up something cool to win!
I want also to underline the fact that, even without Sagan, Bora-Hansgrohe had an incredible start.
They have all the jerseys and they have amazed us with this incredible class feat.
Posted by Piesk8Cycling at 01:04