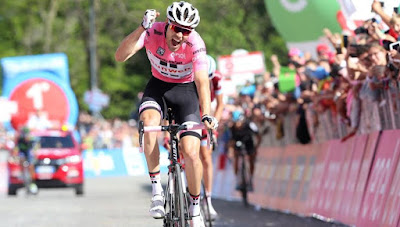 I want to  divide this brief Impression in three parts, because we've just finished an intense week.

Last week has been the week of Gaviria, he claimed and obtained a place in the sprinters' elite.
He dominated the sprint, winning each  time in a different way, showing the world his multiples skills.
Ewan could be the only one faster than him, but he is too small and struggle too much while fighting for position.
Sam Bennet is supported by an incredible team, but unfortunately found a sprinter stronger than him.
I'am a bit disappointed by Greipel, he could not be satisfied with just one stage win, even if it gave him the pink jersey.
If you are one of the best sprinters in the world, you have to do something more to remain in the elite, considering that, as we said, you have a new impressive opponent.

I've never seen Tom Dumoulin so confident and self-aware.
He demolished his opponents on his field, the TT, but what he did on the Mount Oropa climb is even better.
He won on the Pantani's climb wearing the pink jersey, what else do you need to be considered a champion?
He has learned a lot from his Vuelta's defeat and will fight 'til the end of the Giro, with a great TT waiting for him in Milan.
Quintana is the strongest climber of this Giro 100 and it seems to be the only one capable of attacking Dumoulin.
We will see, we have great week ahead.

What can I say about Quick-step Floors?
The Wolfpack is honoring the race and demolishing its opponents on the roads of Giro 100, winning and exciting the crowd on any terrain. What a team!!
The last consideration is about the so many teams that haven't already gotten anything from this Giro 100 and that are doing nothing in order to justify their participation.
You will understand of which teams I'm talking about once the Giro is over, reading the upcoming article in which I'll rate the teams.
Posted by Piesk8Cycling at 14:56