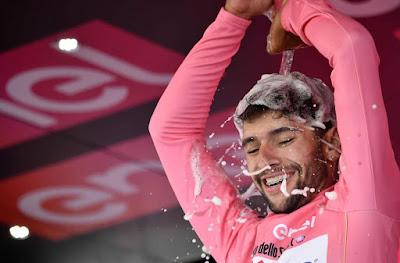 The Giro 100 has started three days ago, but it seems to be started just for two teams.
Bora Hansgrohe and Quickstep Floors attacked and deserved they victories, honoring such an important edition of this wonderful race.
Bora Hansgrohe, maybe due to the fact that Sagan wasn't in the race, started attacking with all his riders and were rewarded.
Quickstep Floors choose the windy day to teach cycling to the peloton, doing the one that, so far, could be called the best feat of the Giro 100.
I can understand that the teams with the GC contenders prefer to ride safely in the bunch, but in such a hard race I ask myself when weaker teams think they will have a good occasion to win a stage.
In conclusion, after these three stages is confirmed something that I always love to repeat: in cycling if you attack you may loose, but if you don't attack you can't win.
Posted by Piesk8Cycling at 12:00