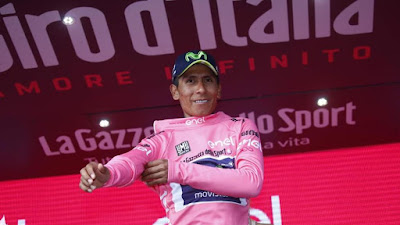 It has not been a memorable Giro, except for the Blockhaus stage, so far, but the best is yet to come.
Smaller teams are not interested in fighting for a stage win and the Peloton seems asleep, providing the same show almost everyday.
Bora - Hansgrohe and Quick-Step Floor are still the only two teams honoring the race and taking great victories and podiums.
I want to underline also the strength of Gazprom Rusvelo, the only team that everyday has a man in the breakaway.
Dillier saved the Giro of Team BMC considering that team's GC ambitions sank in the Blockhaus stage.
Talking about the Blockhaus stage, the first consideration must be on Italian police, shame on them. They eliminated 3 GC contenders with one of the silliest move you can do in a cycling race.
Talking about the "survivors", Quintana proved to be the best, supported by a great team with licence to kill, see Gorka Izagirre.
Pinot is not a surprise for me, he is riding incredibly well since the beginning of the Giro.
He has prepared this edition of the Giro very well. He is stronger than Quintana against the clock and can be considered the first rival of the new pink jersey.
Dumoulin surprised me, he made a solid performance on such a hard climb.
Considering that he is the stronger GC contender in TT stages, he can take away the pink jersey from Quintana tomorrow and try to defend it as long as possible.
Just a few words about Nibali, he is riding alone, his team is inconsistent.
My question to the Bahrain - Merida director is: if you know you have a weak team compared to your opponents, why do you spend in a breakaway, the day before a mountain stage, one of your strongest climber? I really hope Bahrain - Merida is fighting for something more than a stage win.
Posted by Piesk8Cycling at 10:09